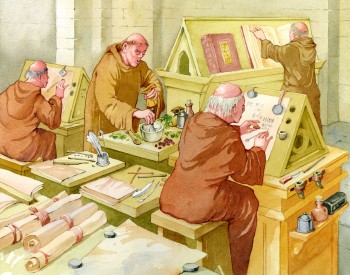 Monks of Micklegate is an interactive exhibition based in Holy Trinity, Micklegate to explain and celebrate the life and achievements of the Benedictine monks who once created a remarkable community here.

Though it is thought that Holy Trinity's origins date back to Roman times, in 1089 Benedictine monks arrived from Normandy and built a large monastic complex with a priory church at its heart.

Sue Raines of Dick Raines Design spent over two years researching the story of Holy Trinity church for this exhibition. This research took Sue to St John's College Oxford where a bestiary (a book of beasts depicting the Christian virtues as displayed by God's creation), which was made by the monks of Holy Trinity, is now kept. 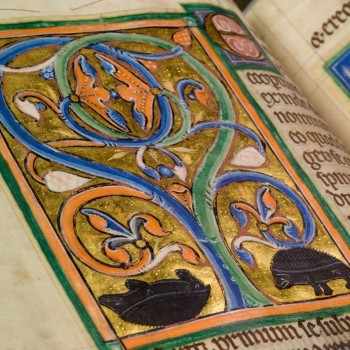 This 800 page book has 90 coloured illustrations which Sue discovered had not lost any of their colour or vibrancy. Reproduced and enlarged these images play an important part in the Monks of Micklegate. A bestiary is a book in which the real and imagined habits of animals are used to symbolise the Christian virtues. For example, bear cubs are shown being born formless and literally 'licked into shape' by their mother after three days: this referenced Christ's time without bodily form between his death and Resurrection three days later, and the role of 'mother Church' in shaping the way people lived their lives.

The industrious monks produced their own paper and ink for the bestiary; how they did this is told in the exhibition's activities.

The Benedictines kept one foot in the cloister and one in the outside world, founding schools, caring for the sick in their hospitals and building things like watermills and windmills to improve their farms and estates. Offering hospitality to strangers was a key part of Benedictine life then and remains so today. Saint Benedict himself made it part of the Rule by which the monks lived their daily life, basing it on the Bible verse Hebrews 13:2:

"Do not neglect to show hospitality to strangers, for thereby some have entertained angels unawares."

Monks of Micklegate has a serious note detailing Robert Aske's resistance against Henry VIII's move to destroy the wealth and power of the religious orders, culminating in his trial and execution for treason and the hanging of 250 other supporters. Known as the Pilgrimage of Grace, this act of defiance in 1536 thrust York to the centre of the national stage as the tragic events were played out.

But it isn't all serious - the story of the Monks of Micklegate is brought to life with fun games, quizzes and interactive panels - ideal for enquiring minds of all ages!

Exhibition thanks and credits

Holy Trinity Micklegate Parochial Church Council; Heritage Lottery Fund; Tony Barton and Peter Richardson for the illustrations Holy Trinity Bestiary images reproduced by permission of the President and Fellows of St John' College, Oxford; Dick and Sue Raines of Dick Raines Design for the research, writing and design of this exhibition; Zoe Kemp, Churches Regional Commision for Yorkshire and the Humber for the planning and grant application support.